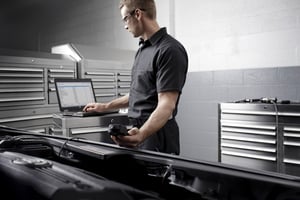 There are some confusing terms that have been floating around the industry for a while. We hear the question often: What’s the difference between an auto technician and auto mechanic?

Unfortunately, each title brings a different image to mind, but they’re still used interchangeably. Technicians are all about critical thinking, focus, attention to detail and using deductive reasoning to “put the pieces together” in a strategic approach to their work.

Whereas mechanics are thought mostly to be doing physical work. As the industry has evolved, it’s revealed how inadequate the term “mechanic” really is in describing all that today’s techs do.

That’s why we think it’s time to set the record straight, and it may be time to retire the term “auto mechanic.” What’s the difference between an automotive technician and mechanic? Read on for our thoughts.

The Term “Mechanic” Is Problematic

Just because you don’t hear every auto professional object when they’re called mechanics, it doesn’t mean there aren’t problems with the term. Unfortunately, in recent years, “mechanic” has been tied to demeaning terms such as “grease monkey.” It’s a subtle problem that’s crept into the language and ultimately causes misunderstandings about what auto technicians actually do.

Essentially, when you think “auto mechanic,” you probably think of the physical parts of a job: cranking on nuts and bolts or hammering away on stuck and rusted parts.. That may be part of the job, but it isn’t even close to touching the bigger picture.

Unfairly, it ignores the deep critical thinking and problem-solving skills at the center of modern auto careers. Sure, it hints at the physical, mechanical parts of the job, but what about the strategy, detail, and critical thinking involved?

It’s true that auto technicians tackle mechanical tasks, but the term “technician” is much more appropriate for tasks that require deep focus. Think about the precision that goes into rebuilding a transmission. Consider the detailed knowledge and ability to perform precise measurements needed to assemble an engine. With the complexity of today’s vehicles, even the most mechanical tasks require a  deeper understanding than ever before.

What’s more, the term “technician” is much better at representing how specialized roles can be. Technicians can work in a range of specialized, highly advanced roles within the auto industry. When you’re working as a  diagnostics specialist or are trained in the restoration of classics and collectibles, the term “auto mechanic” just doesn’t cut it.

When you think of a mechanic, you probably visualize wrenches, rags, and screwdrivers—not computers. But modern automotive technology requires auto pros to understand highly complex systems.

Today, all modern vehicles include at least one computer system. Most use multiple computers to control things such as brakes, monitor fuel consumption, and manage  engine systems. And there are even more high-tech vehicles fresh on the scene.

The point? Today’s auto pros have to work with technology on some level—usually a high one. That makes “auto technician” a much more apt descriptor.

Even if you exclude specialists, you’d be hard-pressed to find a professional auto career that is purely mechanical. That’s because today’s most basic automotive tasks require advanced knowledge.

Take a brake change. Seems simple enough, right? Actually, the task often requires at least the use of a scanner. And technology in the automotive industry is advancing at an amazing rate.

With all of this in mind, there’s a broader reason the term “mechanic” doesn’t fit with the actual work being done. That’s the message it sends about the industry’s future. Simply put, it undersells the complexity of automotive careers.

Here’s a simple test: When you look at other industries that require a mix of mechanical know-how and advanced technology, such as health or computer science, does the term fit?

So what’s the difference between an auto mechanic and an auto technician? We say “auto mechanic” isn’t a fair description of professionals in the modern auto environment.

As the industry advances, it’s finally time to drop the confusion and call auto pros by a term that is accurate and relevant in today’s world. Speaking of keeping up ... are you interested in staying up to date on the latest trends and changes in the auto tech industry? Subscribe to our blog here.