Parent Toolkit: Is Technical College Right for Your Kid? 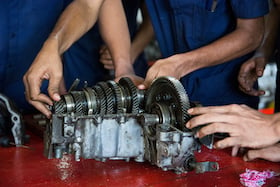 In education, one size doesn’t necessarily fit all. A traditional, four-year college may be a great place for some students, but if your child enjoys working with their hands or has a learning difference such as ADHD, dyslexia, dysgraphia, etc., a technical college may be a better fit.

Keep the following facts in mind when advising your child on the possibilities of a tech school.

Enrollment (and Opportunity) Is on the Rise

The market for jobs with competitive pay that don’t require a 4-year college degree is substantial, to the tune of 30 million positions with an average annual salary of $55,000. Tech school graduates are also more likely to be employed and to have jobs in their field of study than those with a four-year college degree.

And states are taking notice—California poured $200 million into a vocational education resurgence and $6 million to tell the world about it.

Despite the above statistics, negative attitudes and incorrect assumptions remain embedded in our culture. High schools often promote the number of graduates who go on to four-year colleges but say nothing about their students who enroll in trade school. European countries handle this quite differently—they celebrate trade occupations and half of their secondary school graduates go on to vocational training.

Among the many factors that led to the stigmatization of vocational education, one of the most potent was an unintended side effect of an otherwise laudable and necessary piece of legislation—the Servicemen’s Readjustment Act of 1944, more commonly known as the GI Bill. Among the act’s many programs to help returning World War II veterans readjust to civilian life were incentives to attend a four-year college. This led to a perception that traditional college is the preferred path to success.

These programs are also ideal for working adults who may not have the time or resources to devote to a four-year college—or the ability to wait for a full-time salary, which is by no means guaranteed.

Technical colleges put success directly into the hands of students, letting them sink or swim on their own merits. This builds resilience, encourages independent thinking, and teaches that the best solutions often come from within. These colleges provide a mix of strong academics and real-world training that is easily applied to such diverse industries as transportation, HVAC, electrician, IT, auto repair, manufacturing, and many more.

Does your child have ambitions to climb the corporate ladder? To start in a cubicle and someday occupy the corner office? Or does she want to build things with her own two hands? See something come to fruition brick by brick? If the second option rings a bell, then a traditional college path may not be the best fit.

Because hands-on experience is key to a technical career, it doesn’t do much good for your child to sit in a crowded lecture hall. If he or she never felt at home in a traditional high school class environment, a tech school might be the ideal fit, where there is hands-on learning and usually no more than 20 students in each class to allow everyone to participate.

Whereas the average college degree typically takes 4-6 years to complete—with many required courses that don’t pertain to the major—your child can finish a tech school program in as little as six months to two years, depending on the field of study.

Another advantage of a shortened program is that your child will pay far less tuition and graduate with far less debt than her bachelor degree-seeking counterparts. With four in 10 adults under age 30 carrying significant student loan debt, this option presents an appealing alternative.

An Alternative Path to Success

The traditional, four-year college has long been held up as the best path to financial success and a fulfilling career. Although that may be true for some students, others may need to follow a different route to get there.